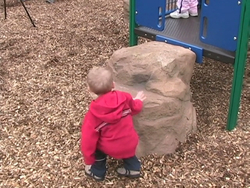 [video: scene fades into a full side view of the realistic glass fiber reinforced concrete playground stepper designed like a large rock. The camera slowly zooms in on a detailed shell fossil carved in the side of the rock. Scene switches to a full view of the climber as a boy stands up on the top of the climber. A young girl runs around the climber stepping up behind the boy onto the stepper.]

Woman off camera: Jump of Glen!

Woman off camera: Maddie will you try climbing up there?

[video: scene switches to a side close-up of the top of the rock climber where a child’s feet and hands can be scene. The child braces themselves with their hands on the rock. A child has a conversation with the woman off camera.]

[video: scene switches to a front view of the climber as two boys climb on the stepper. They both climb to the top of the climber and jump off as the camera zooms in and focuses on their feet. Camera switches to a close-up of a boy’s hands and feet as he steps up onto the top of the rock climber. The camera pans up to the boy’s face as he looks to a woman who is speaking to him off camera.]

[video: the boy jumps down from the climber off camera. A line of children waits their turn to climb and jump off the stepper rock climber. Scene switches to a side view of two boys climbing on the rock climber. The camera focuses on the realistic detailing of the rock climber.]

Woman off camera: Wyatt try climbing up and jumping down.

[video: scene switches to a front view of the climber as a young girl bends her knees and jumps as high as she can off the climber.]

Camera man: Oh, you got the most air I’ve ever seen.

[video: the camera zooms in to the young girl as she smirks to the camera.]

The Stepper™ Rock Climber is a rustic pathway to fun made just for kids ages 2 to 5. It provides a fun first rock climbing experience for the youngest explorers. Colors vary slightly, and the Natural Elements™ climbers have the look and feel of real rock.