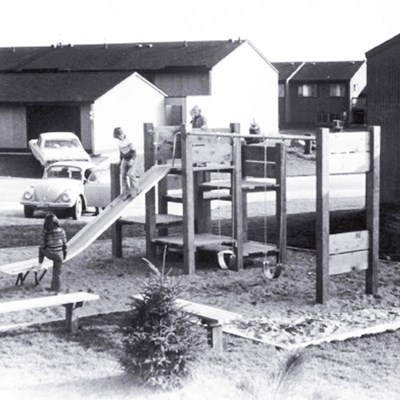 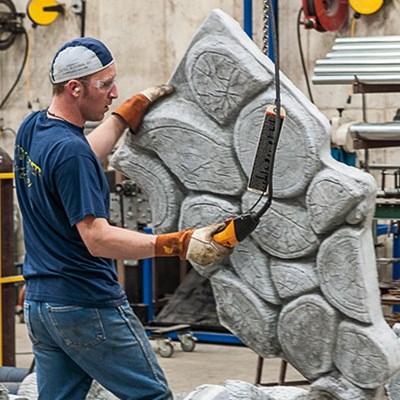 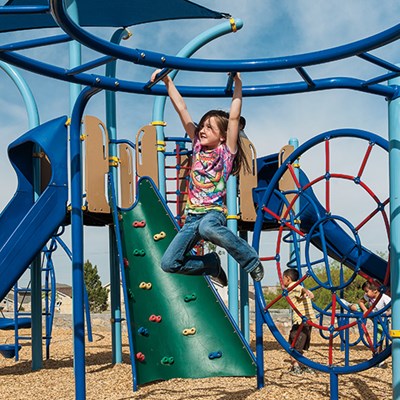 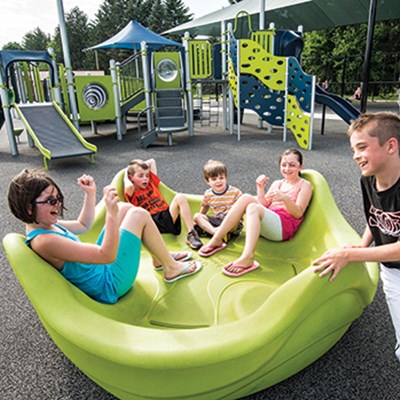 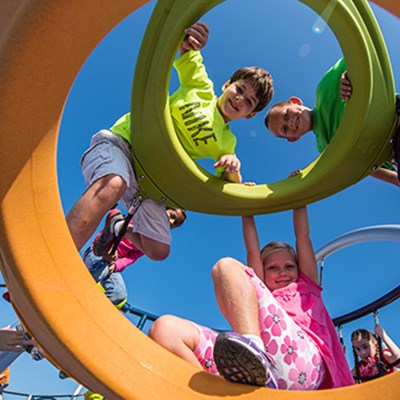 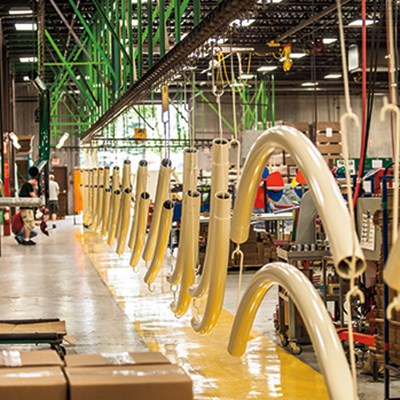 [video: camera pans left to right out across an open field lightly covered in dew and fog as the sun begins to rise. Text fades into the blue sky reading: Located thirty miles west. Scene switches to a view up at a bridge railing leading to a light post with an American flag and decretive banner with a pint flower and sun on it. Text fades into the sky of the scene reading: of Minneapolis.]

[video: view down a bridge where cars drive towards the camera as the sun begins to light the trees and the town water tower in the distance. Camera zooms in closer to the end of the bridge as cars continue to drive past the local stores and gas stations. Camera zooms for a close-up of the Delano water tower lit by the morning sun.]

[video: view down a winding dirt road as with lush green trees on either side as the sun beams down through them to light the road. Text fades into the middle of the road reading: in Delano, MN.]

[video: camera slowly zooms out for the Delano town population sign as a car drives down the road. Camera switches to a four way stop in down town Delano where a trucks and cars take their turn crossing the intersection. Scene switch to a view across a tall grassy field to a neighborhood playground with homes in the background.]

[video: close-up of a large green plant leaf as it gently bounces in the breeze. Camera pulls back for a view out over the Crow River in Delano. Scene switch to a full view of the front of the Landscape Structures office building. Text fades into the top left corner of the screen reading: Landscape Structures. Scene switch to a pan across the playground at the Barb King Inspiration Park in Delano. Text fades into the sky of the scene reading: invites you to.]

[video: Scene switches as the camera slowly zooms out from a full view of the nature themed playground at Rebecca Park just outside of Delano. White text appears in the middle of the scene reading: Come see what we’re about. Fade to white.]

Pat: I think it’s very important for customers to come to Landscape Structures to really experience our special culture.

[video: camera pans up a two-story mural of a young girl climbing on a playground climber in the center lobby of the building.]

Pat voiceover: You know in this day and age there’s all types of information that’s an information overload with great marketing and everything sounds wonderful and but to be able to really come in and kid of kick the tires and really understand what’s going on and in an organization is so important.

[video: Camera zooms out from a wall with framed images pinned of past tours. A banner above the pictures read: VIP Tours. Camera zooms out from a foam core Welcome sign reading: Welcomes, Off-Site Institute Attendees, National Recreation and Park Association. Steve Kind Landscape Structures found shakes hands with a group of people standing in the lobby. Camera pulls back as a group of people stand in a circle in the front lobby conversing.]

Pat voiceover: And we feel very very strongly about bringing our customers in we do it all the time. And typically, when they come in they get a chance to meet the whole management team and then eventually most of the company as they get a very detailed tour of all of our facilities but most importantly our people.

[video: Camera zooms out from a while with framed images pinned of past tours. A banner above the pictures read: VIP Tours. Camera zooms out from a foam core Welcome sign reading: Welcomes, Off-Site Institute Attendees, National Recreation and Park Association. Steve Kind Landscape Structures found shakes hands with a group of people standing in the lobby. Camera pulls back as a group of people stand in a circle in the front lobby conversing. A man sitting at his desk talks to three people as they tour the offices and workers at Landscape Structures. The woman leans over to point at his computer screen. Camera angle changes to behind the tour as they lean to view a worker’s computer screen with an animated rendering of a future playground. Pat points to a framed catalog cover on the wall to tour attendees. A woman wearing a yellow hard hat walks down to view the rows of framed catalog covers.]

Pat voiceover: I lead off with a pretty simple explanation of our history and how we got to the stage and what’s really important to us I our mission. And talk about our lean manufacturing in our pursuit so they understand what they see the shop and how it happens and just how very empowered each and every employee is to help make those changes in those differences.

[video: view of a projector screen with a slide reading: Welcome to Landscape Structures. Camera pans across a horseshoe shaped conference table as a group of people look at a slide show. View of the back of Pat as he sits at the table and address the conference room. Camera zooms in on Lynn Pinoniemi Vice President of Marketing and David Smith the Vice President of Sales as they listen to Pat’s presentation. Camera pans back across everyone sitting at the conference table. Scene switches back to Pat speaking to the camera outside the office building. Scene switch to the camera following to people through the manufacturing factory. The tour group and Pat stand behind a factory worker as he runs a large factory machine by computer. The camera zooms in on Pat as he can be seen explaining the process of the machine. Close-up of a large playground post as it goes through a machine. The machine rotates the post as sparks fly at the bottom.]

Pat voiceover: And it’s I think it’s important that they go out into that factory talk to any employee on the factory floor or in the office and ask him any question they want. Right down to do they like working here, how long have they worked here, what’s important to them what’s important to the customer? How do they do their job? And what they find is a very empowered group that is very used to this and wanting to explain wanting to be part of a sales process along with the innovation along with the creativity along with the great repeatability and the reliability that Landscape Structures brings and I believe our innovation that they see that’s part of it but also the employees in the culture the attitude. It’s truly a special place.

[video: a worker hands a finished post to show the tour what the machine he is working on does. View from behind the woman on the tour as a worker explains the post he handed to her. A worker shows the tour a board that they use to manage work flow in the factory. A worker speaks to one of the tour attendees and points out to the factory floor and explains the process. Back view of a large tour as they listen to a worker explain his work station. Close-up of the worker speaking into a microphone, so the tour group can hear him. Camera angle switches to behind the workers as they address the tour group. Camera switches to an elevated view of the group tour as workers continue to explain their work station. Close-up of a man’s face as he listens to the tour and looks around the factory. Scene switch back to Pat as he speaks to the camera outside the Landscape Structures building. Scene switches back to the worker as he addresses two tour attendees explaining the work process factory board. View down a line of tour attendees as they listen to a worker speak into a microphone in the loud cutting and welding bay of the factory. View up at a worker and two tour attendees as the worker continues to explain the factory process board. Camera slowly zooms out from the worker speaking into the microphone for group tour at the welding and cutting factory bay. A man on the tour walks around a finished concrete rock climber in the factory. Camera focuses on a large concrete painted whale head for a custom playground. Close-up of an unpainted concrete tortoise statue on the factory floor. View of a tour as they watch a rotomold machine as it spins. Camera pans across the factory shipping floor where tour attendees stand and converse amongst themselves about the finished playground equipment.]

[video: Close-up of a woman wearing a yellow hard hat walking across the factory floor. Scene switch back to a close-up of Pat talking to the camera. Camera zooms out from a tour group as they walk to the next bay work station. A worker carries a stainless-steel post and sets it in a pile of other posts. View up to a worker as he addresses a tour group using a microphone and speaker system. Two women listen to a factory worker as he explains his station over the microphone. The two women shake their heads up and down.  Top down view into the building lobby as many people line all the way around the walls. Fade to white and fade into a woman speaking to the camera. Text on the bottom of the screen reads: Amber Aspengren, Customer.]

Amber: I thought it was amazing how dedicated the employees were and how when they when they gave us a tour and took us through their portion of what they do during the day.

Amber voiceover: The excitement and the expression on their face just showed how much they believe in what they do when they they’ve been a part of the entire process and how things work. And you could just see that talking to them. And the thought process that went through making each part it really shows the quality of Landscape Structures equipment and that’s something that I want to make sure my kids get a chance to play on.

[video: a worker torches a Permalene panel to finish it. The camera zooms in on the workers hands as he continues to use a blow torch on the Permalene panel. Close-up of the worker as he intensely focuses on his work. Camera switches back to Amber speaking to the camera.]

Amber: And I know that it’s safe and it’s a worthwhile investment.

[video: close-up of a Landscape Structures employee as he smiles and laughs at his desk. He turns back to nod to the tour group behind him. Text in the middle of the screen reads: Schedule your visit today. Scene switch to a view through class of a 3D collage of the Landscape Structures company history. Scene change to a curved wall with the word “innovation” printed on it. Close-up of a poster on an easel reading: Design Department. View of a large tour group gathered in the building lobby. Close-up of Pat Landscape Structures president as he speaks to a tour attendee. He waves his hand while he talks to the group. Pat walks two tour attendees over to a cased 3D collage in the lobby entrance. Camera pans to a tour group with Landscape Structures employees kneeling in the front posing for a group photo. Fade to white and back into Pat as he speaks to the camera.]

Pat: Come see what Landscape Structures is all about.

"I appreciate the dedication, passion and teamwork of the Landscape Structures family."

Learn about our Employee Owners