Although technology has created numerous beneﬁts to society, it has also changed the way children play. The unfortunate side of this technological age can be seen in the obesity epidemic, which is clearly present today. According to National Health and Nutrition Examination Surveys, in 1971-74 obesity rates were 5 percent for 2- to 5-year-olds, 4 percent for 6- to 11-year-olds and 6.1 percent for 12- to 19-year-olds. Those numbers have more than doubled in the past 40 years.

We need to reverse the obesity trend for our children’s sake, and the solution is literally in our backyards. Parks and playgrounds are available for us to enjoy and benefit from. 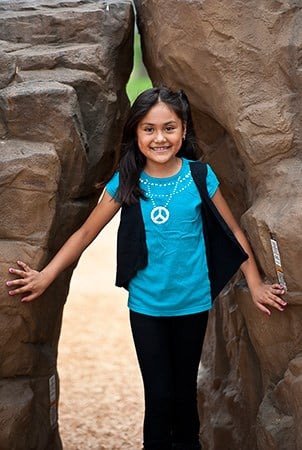 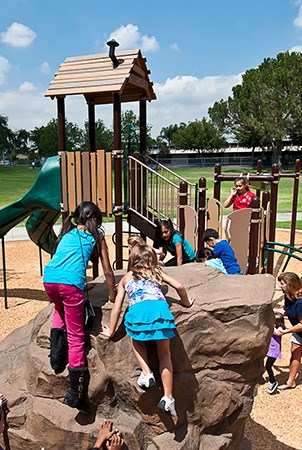 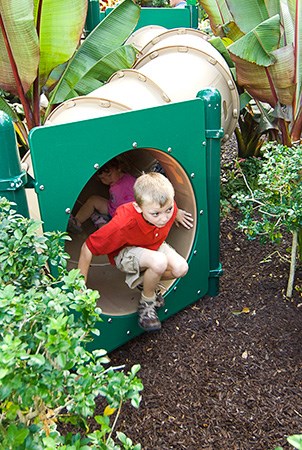 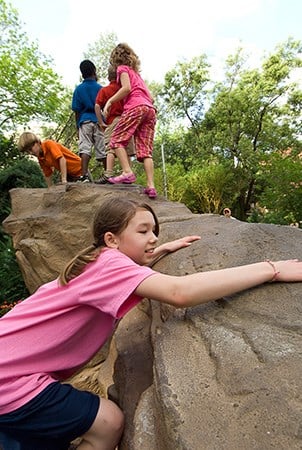 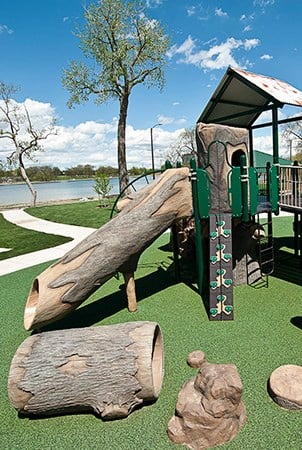 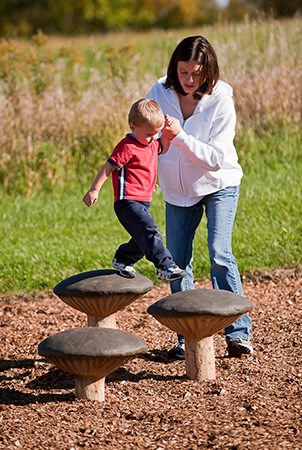 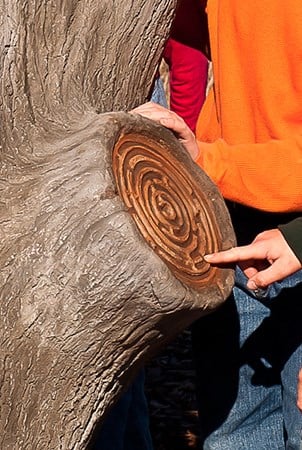 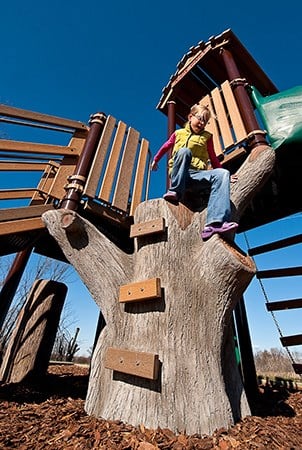 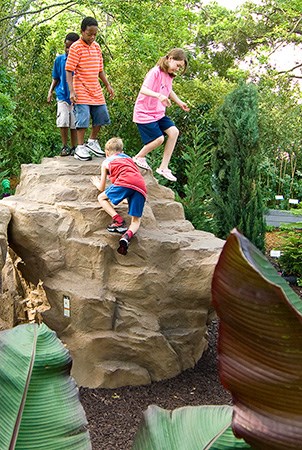 The great outdoors is the number one spot where kids can play naturally—making up their own games while freely exploring the world around them.

Our nature-inspired playground collection is a natural fit when it comes to planning outdoor play spaces, combining the adventure and wonder of nature with the durability, safety and low maintenance of high-quality play equipment. And our team of artists will work with you to blend your new playground into its surrounding environment—making your outdoor play space a place where children and families gather.

[video: fade in to a blue screen with flicker light all around. White text appears in the center of the screen reading: 1 in 5 American children. A woman’s voice narrates the video.]

Voiceover: Nearly one in five American children is overweight. Kids aged 8 to 18 spend about six and a half hours a day with electronic media.

[video: the blue screen continues to flick with light as new white text appears in the center of the screen reading: Kids aged 8 – 18.  New text appears reading: 6 ½ hours per day. The scene slowly zooms out revealing the blue screen of a tv with two children sitting on the floor watching it.]

Voiceover: These factors are shaping a generation of sedentary kids.

[video: the wall behind the tv splits into a “V” revealing a sunny golden sky. The floor boards the children are sitting on turn to lush green grass and a tree sprouts replacing the TV.]

Voiceover: But research shows that children who regularly experience free unstructured and imaginative play in a natural setting are happier and healthier.

[video: The scene zooms out from the still image of two boys sitting in front of the tree to rolling grass hills where children run play and explore. Animated rocks roll onto the screen as the scene fallows them into a new image of two girls running down a grass hill. The rocks rap around a rock climber with a boy sitting at the top smiling. The rocks continue to spin around the screen and flow into the next still image of two girls sitting in the grass looking up to the sky with a large super imposed mushroom behind them. A tree sprouts from the bottom of the tree and grows to the top of the screen. Wood stepping rungs appear on the tree with a wood plank with red writing reading: Kids only. View pans up the tree to an image of a girl smiling while she climbs up the wood rungs. View continues to pan up to the top of the tree where an image of a tree fort with two children stand and sit at the top. The scene continues to pan up to the golden cloud filled sky. Green shapes swirl around the center of the screen revealing green text reading: Play Naturally.]

Steve: Playing naturally is literally doing what kids do every day they play they naturally play.

[video: narrating voiceover begins as Steve and another man walk through a grassy park towards the camera.]

Voiceover: Steve King believes it’s his company’s job to attract kids outside to play naturally. So, Landscape Structures created nature inspired play systems that blend the beauty and wonder of nature with the safety, age appropriateness, and durability found in manufactured equipment.

Steve voiceover: In this case a balance of nature it’s a balance of manufactured products if we can combine those two together we’ve got the best of both worlds.

[video: green leaves fly from left to right revealing the next scene of the golden sky with clouds. Green swirl shapes reveal green text in the center of the screen that reads: Tree House. Narrating voiceover begins.]

Voiceover: The tree house was designed to feel and look as real as possible. Glass fiber reinforced concrete provides an authentic look and texture. Plus, playground friendly durability.

Steve voiceover: They are very realistic looking because they’ve literally come right off a mold off of a tree and we can duplicate that in concrete and suddenly you have a tree stump that exactly duplicates the bark on the tree.

Voiceover: Well-placed hand and footholds provide kids with as much or as little climbing guidance as they need.

Voiceover: The peak and the stepper are perfect for young adventurers.

Voiceover: While the Pinnacle and the Point introduce new challenges to more experienced climbers.

[video: green leaves fly from left to right revealing the next scene of the golden sky with clouds. Green swirl shapes reveal green text in the center of the screen that reads: AdventureScapes®.]

Voiceover: AdventureScapes components combine the ruggedness of our natural climbers with the exciting challenges of climbing cables. Now kids can build upper body and core strength as they maneuver up over and back again. AdventureScapes systems can stand alone or connect to other play structures. Choose from several Configurations or customize your own.

Voiceover: Let our talented custom team create an organic structure that blends into your natural environment or showcase your area’s natural history.

Camera switches to two men as they sit and listen to the meeting. Camera switches to a close-up pan across a scale model of a hollowed down tree tunnel climber. Scene fades into Lake Rebecca Park where the finished custom hollowed down tree tunnel climber sits in the middle of the park. The camera pans across the Treehouse play structure with surrounding rock climbers and frontier cabin. Scene fades into the camera panning up realistic clay sculpture of a bald eagle. Scene fades into a finished painted bald eagle statue sitting on its nest at the top of the treehouse playground. Scene fades to a ground view of the treehouse themed playground with lookout bald eagle statue at Lake Rebecca Park.]

[video: scene fads into a large log stump cut at an angle with a playground sign with Animal Find and Plant ID images. Scene fades into Steve King talking about natural play.]

Steve voiceover: And I think if we can start kids thinking that way and if they can touch the bark and feel the bark and then go find those trees in the woods I think we’re accomplishing something.

[video: close-up of an Owl incorporated into a concrete tree climber. Camera switch to a view of a cabin roof with a stone chimney where a concrete raccoon head peeking out from a hole. Scene switch to the back of children as they play at a Discovery Tree Age Tracing Panel. Ground view of an incorporated grey squirrel in the hallow of the discovery tree. A childes feet runs past kicking up leaves and dirt. Scene switch to a girl tracing her finger on the Tree Age Tracing Panel on the Discovery Tree climber. Green leaves fly from left to right revealing the next scene of the golden sky with clouds. Green swirl shapes reveal green text in the center of the screen that reads: Seeing The Whole Play Environment.]

Voiceover: It’s a rare play equipment company that has a Landscape Architect for an owner that’s why we’re the perfect partner to enhance your site design with nature inspired elements.

Steve voiceover: That’s not a play structure and a sandbox but rather a whole play environment.

[video: scene fades to a playground with SkyWays shades over head with large trees in the background.

Steve voiceover: Here’s the structure itself here’s the manmade part.

[video: elevated panning view of a playground incorporated into the natural landscape of a park. Scene fades into Steve speaking to a man as they lean on a dock railing with a pond in the background.]

Steve: But here is what you should be considering the play environment and,

Steve voiceover: bring in trees, bring in gardens, bring in plants that attract hummingbirds and butterflies. And run that little path through there and we can create all of that but it’s wonderful when nature can do its part.

Voiceover: In the end our number one priority is to get kids outside to play. So, they can play naturally the way kids are supposed to play.

Improved concentration and school achievement, reduced stress levels and a foundation of environmental stewardship are just a few of the benefits children receive from playing outdoors. See the following resources to help bring a nature-inspired playground to your community: