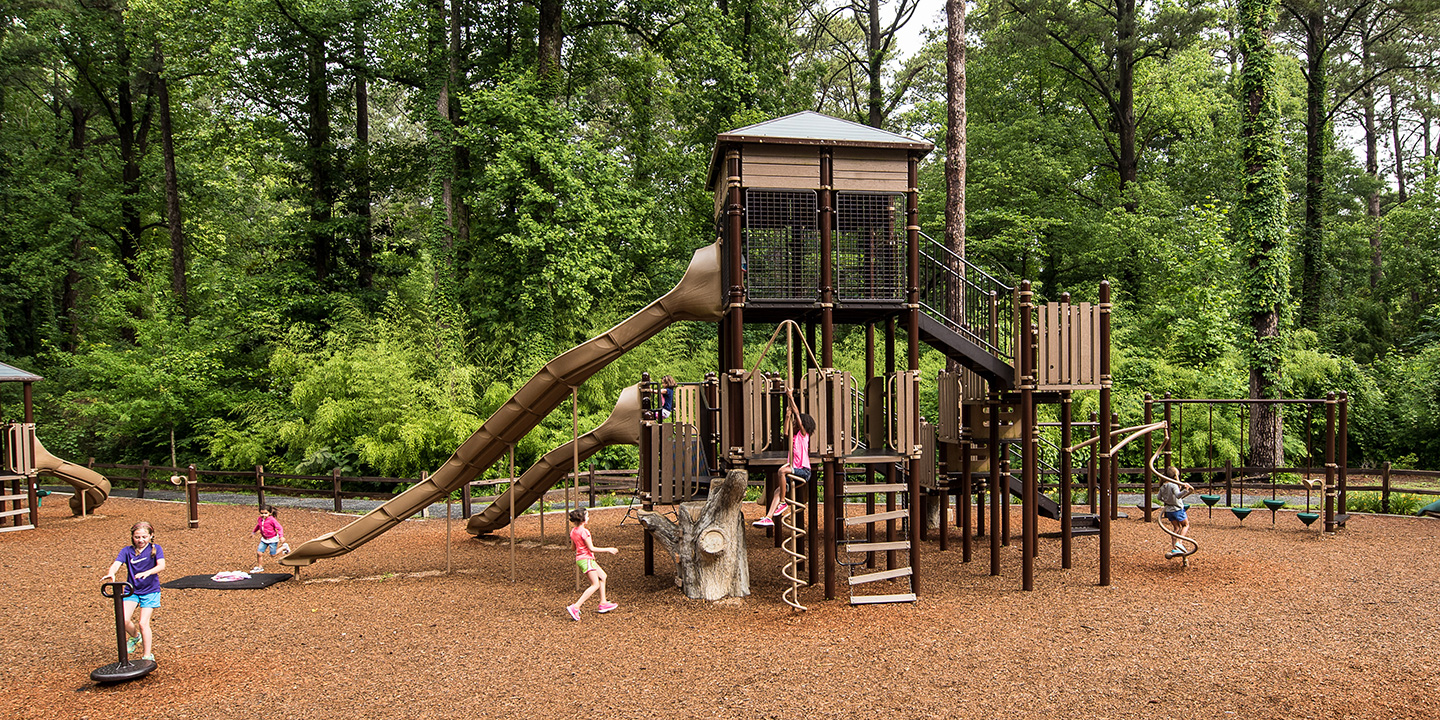 The benefits of free play and daily exposure to nature have been researched and reported in nearly every media outlet in recent years. Playground planners have an opportunity to create playground spaces that encourage children and families to get outdoors, interact with their environment, learn about their natural surroundings, and encourage the reconnection with nature. The Nature-Inspired Playground Design continuing education session explores the wide range of natural play environments.

We are authorized to provide .1 CEUs, 1 LUs and 1 PDHs, which meet Health, Safety and Welfare credits. We also offer AIA credit including nano units. After this 60-minute Learning Academy session, you’ll have an understanding of the following learning objectives:

[video: fade in to volunteers as they walk past the camera around the build site. Volunteers work on different projects all around. A volunteer bends down and waves into the camera with both hands.]

[video: fade in to Toynita speaking to the camera.

Toynita: All right how did this project come to me well my general director of elementary education thought of me, Dee Washington, because she’s known that I’ve always wanted to have an outdoor place where children can go and learn so. I thought it was going to be...I’m thinking you know picnic tables and umbrella here or there. When I saw the little diagram or the drawing of what was going to be I was like...

[video: Toynita makes an excited face. Camera switches to a volunteer woman as she speaks to the camera.]

Woman: This is an incredible opportunity for NAESP principals to come and share with another school work with Landscape Structures. What you’re putting in here is an absolutely phenomenal.

[video: scene fades into several men as they look down at several nature-inspired concrete log benches. The men look at the bench deciding what they would like to do next.]

Man off camera: Maybe taking these suckers out of here.

[video: fade in to a group of men as they all work together to lift the heavy log bench out of the pre-dug holes to lay it on its side.]

Man: We feel this is a way for us to give back to fellow principals and just a chance to get together. Come on through don’t let me get in your way.

[video: the man was to people off camera. The man continues to speak to the camera.]

Man: Love getting out here getting their hands dirty and working with all these people can come from across the United States put together these projects it’s just it’s a great deal.

Mark: Ok no one’s going to believe that, they’re going to think it was staged.

Woman: Okay, well we’ll get there.

Woman off camera: The ladybugs are awesome.

[video: scene fades into a group of children all sitting at the top of the rock climber.]

Man off camera: We ran over here because we had three kids on it.

[video: scene fades into all the volunteers as they sit at lunch tables inside the school. Scene fades to children as they perform for the volunteers on a stage in the lunch room. Two boys lead a group of kids in a song.]

[video: scene fades in to further on through the song.]

[video: scene fades into the class as they all sing and rap together on the stage. The children dance and sing for the volunteers. The crowd cheers for them. Screen fades to black. White text appears in the middle of the screen reading: Thanks for everyone who made this project possible! The Landscape Structures logo fades into the middle of the screen. Text below reads: playlsi.com 888-438-6574.]

We're an Authorized Provider of CEUs

Landscape Structures has been approved as an Authorized Provider by IACET, LA CES™ and AIA.