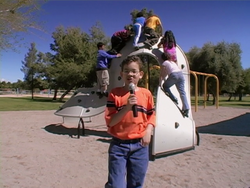 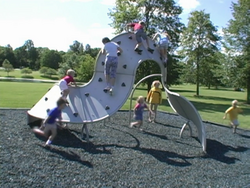 [video: scene fades into a close-up pan across the foot and hand holds of the metal Mobius climber. A man speaks off camera.]

[video: scene fades into a close-up of children’s legs as they climb up the foot holds. A man speaks off camera again.]

Man: Do you know what a millimeter is?

[video: scene switches to an elevated view of children climbing at the top peak of the Mobius climber. A man off camera says: Yippee!]

The Mobius® Climber 7-Panel Model tests the agility and strength of courageous climbers! This is our most popular Mobius for your playground.