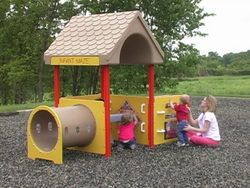 [video: scene fades into a panning out view from a yellow sign panel reading “Infant Maze”. Scene switches as the camera focuses on two panels with white hands holds, bead spinners and slides and a sensory viewing window of colorful beads and other shaped objects. A woman speaks.]

Woman: You want to go sit by the other Grace?

[video: the camera continues to pan past the panels to a third panel with white hand holds and a large hole in the center. Scene switches to a full view of a small play structure with four orange post and a brown roof. A woman holds her son up as he plays at a panel while a little girl kneels at another play panel. A woman sits next to the little girl, and they count beads inside the sensory viewing window of one of the panels.

Woman and girl together: Three, four.

Man off camera: Show daddy how you spin them.

[video: scene switches to a girl kneeling inside the small crawl tunnel. She smiles as she looks out the tunnel. She slides her knees forward inching her way towards the entrance to the tunnel. The camera zooms in on the girls faces as smiles excitedly. Scene fades to black video ends.]

The Infant Maze provides a stimulating environment for early learners. 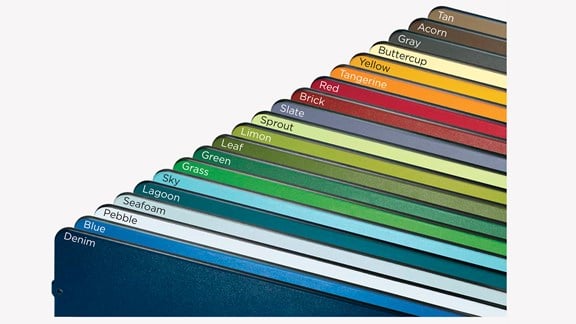