Playgrounds are a place for play and learning—where kids develop physical and cognitive skills and build social relationships. They can provide opportunities for children to practice a range of skills that ultimately play a role in key adult competencies such as the ability to collaborate with others, successfully take on leadership roles, persevere in the face of distractions, and generate creative ideas. Playgrounds provide a tremendous number of benefits to the developing mind and body however, not all playgrounds are welcoming to people of varying abilities. 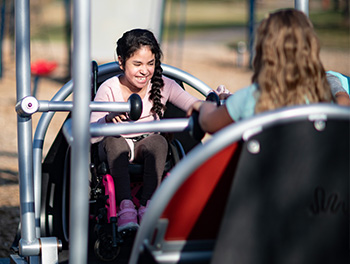 The activity, smiles and laughs experienced on a playground may look like “just fun”, but that play is fostering developmental benefits that will eventually help children become effective thinkers, leaders and collaborators.

An inclusive playground environment offers many benefits including: 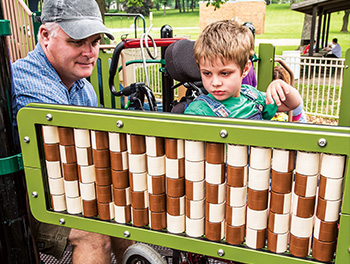 Choosing to create an inclusive play space benefits the entire community because it recognizes everyone as an important member who is valued. Inclusive playgrounds become a space for everyone to enjoy, socialize, create healthy bodies and experience meaningful fun together.

Video features a local Mesa resident as he explains the importance of inclusive play in playgrounds at Pioneer Park in Mesa Arizona.

[video: fade in to Eric Chuller also known as Wolf, stands in front of Pioneer Park playground. He speaks to camera.]

Eric: Inclusive play helps to... hmm how should I put this, it breaks down the barriers. There's it teaches people well not to stare it does it teaches people not to mistreat someone just because they're different whether it's something invisible that you can only see any under a brain scan like mine or whether it's someone and who can't even get out of a wheelchairs.]

Eric: Play has always been a huge component of helping me to socialize with people due to the communication deficiencies I had with my autism. I've always believed that parks and recreation have been an integral part in facilitating socialization for people of all creeds, colors, and abilities.

Eric voiceover: Action facilitates socialization but not without forethought, not without structure and that's what this place has given Pioneer Park, that's what this project has done. [video: camera pans left to right as a group of children stand at a railing of main play structure overlooking the park. Two boys at the top of tower wait to go down the slide and talk at the camera. Young boy squeezes past another to talk at camera. Young boy with glasses sits on in enclosed tower and speaks at camera.]

Eric voiceover: It's restructured the community in its own way and it's not just a fresh coat of concrete, paint, and equipment here the way that people are reacting to it I see proof in the way that these kids are playing with one another. The way that they're exploring, the way that they are meeting friends new and old here. The design of this park certainly helps to unite people well in that model of inclusive play.

As an inclusive play pioneer, inclusive play commitment continues to be lived out in everything we do. We understand how play shapes us and how those benefits are enhanced when play is offered to everyone. We’ve been creating play environments for decades that offer these benefits to everyone as well as increasing awareness to the advantages of play for all. Since the development of the Americans with Disabilities Act (ADA) in 1990, we have been the leader in creating playground designs and events that go beyond minimum ADA requirements. Our innovative and thoughtful inclusive playground equipment and designs invite all children to play together. Today we remain steadfast in our ongoing commitment to create playgrounds that strive to attain a Higher Level of Inclusive Play.

There are more than 80,000 Landscape Structures playgrounds throughout the world. Our founder, Steve King was not only the creator of revolutionary concept of continuous play, but he’s also played a critical role in shaping the inclusive play movement. As a champion for inclusion in the play space, Steve has volunteered countless hours on Federal Committees and Advisory Boards to provide a voice for those with disabilities and design equipment that welcomes, includes and challenges everyone.

Our collaborative inclusive design process combines our expertise, input from your stakeholders along with your unique community characteristics and needs. The result is a responsive inclusive playground design that reflects your vision and promotes A Higher Level of Inclusive Play™ by addressing accessibility, age and developmental appropriateness and sensory-stimulating activity. 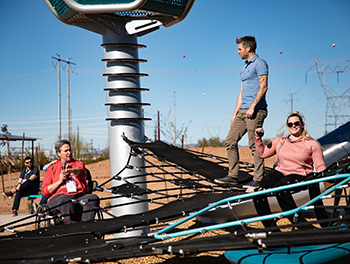 Today, Landscape Structures continues to seek out partnership with like-minded organizations to advance inclusive play throughout the world. Our Inclusive Play team including Ingrid Kanics and internal inclusive play specialist, Jill Moore, is available to assist with any inclusive playground design questions, concerns or discuss further special needs equipment considerations. The input from our experts ensures that we continue to create inclusive playgrounds that offer accessibility, age and developmentally appropriate play activities, as well as sensory play.

As a leader in inclusive play, we stay committed to the ongoing research around play. We’ve taken this to a higher level with a collaboration between the STAR Institute for Sensory Processing and The Sensory Processing Disorder (SPD) Foundation, drawing on their unparalleled experience and progressive knowledge to truly understand the developmental benefits children gain while playing on inclusive playground equipment.

Creating an inclusive play space in your community will deliver numerous benefits but most importantly, it will help eliminate bias for children and adults with disabilities. A survey on inclusive play that we conducted with parents across the country revealed changing perceptions from a community standpoint. Nearly three quarters (74%) of parents believe it is important than their children have an opportunity to play with a variety of children, including those with disabilities. There are numerous benefits of inclusive playgrounds such as allowing children of all abilities the opportunity to play together, as well as bringing together parents with disabilities (wounded veterans) and an aging population. View the key findings in our infographic. Additionally, inclusive playgrounds can be a strategic economic boost for a community. Inclusive playgrounds aren’t necessarily being built to be a destination, but it becomes one naturally due to its inclusiveness. Families of children with special needs are willing to travel—sometimes long distances—in order to give their children a chance to play together. And once they’ve experienced that true inclusion, they tell everyone they know about it.