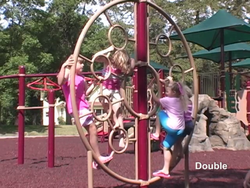 [video: scene fades into a group of girls climbing on the circular climber. The circular structure is separated by a main support post. White text at the bottom right corner of the screen reads: Double.]

[video: ground view up as children climb up the climber. A child mumbles indistinctly. White text appears in the bottom right of the screen reading: Triple.]

Girl 1: Who are we missing?

Boy: I got up when you did.

[video: the camera zooms out from the climber as the children all climb at the top. Scene fades to black.]