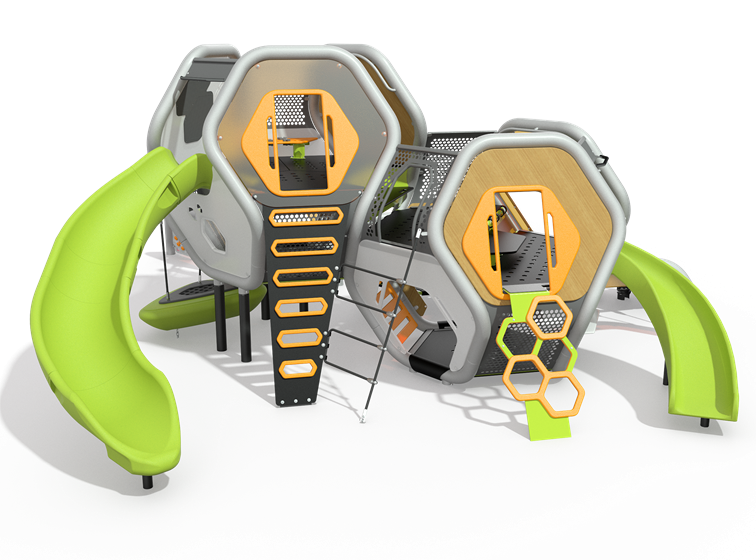 Introduce young players to the many benefits of dynamic play on the Hedra® Scout. Developmentally appropriate activities populate this geometric circuit of continuous exploration. 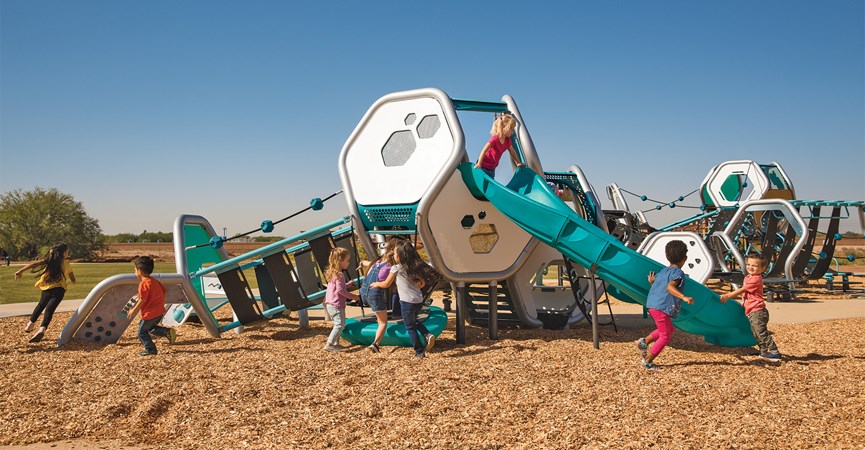 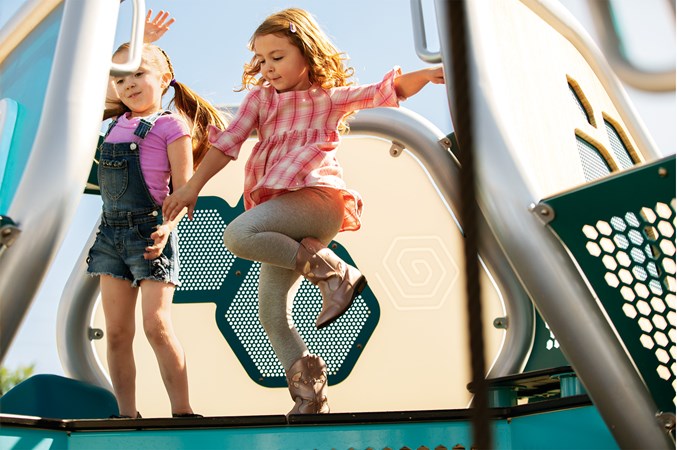 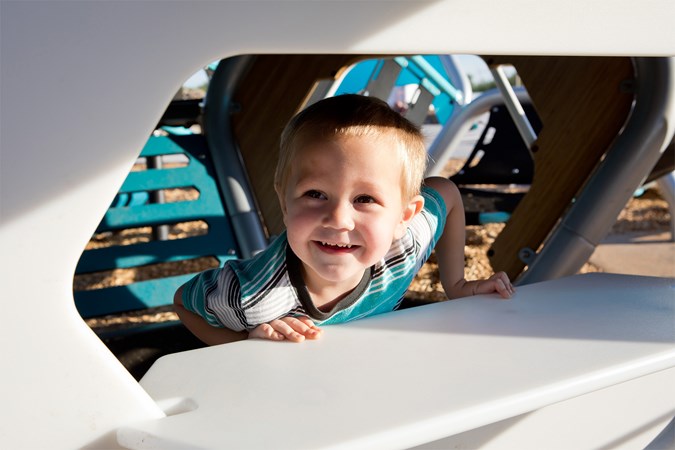 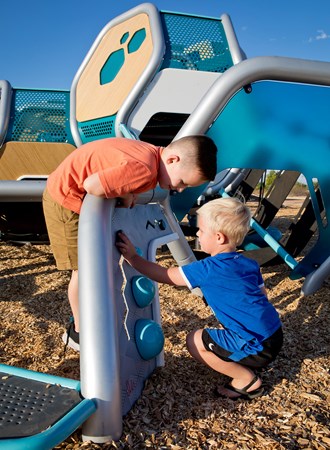 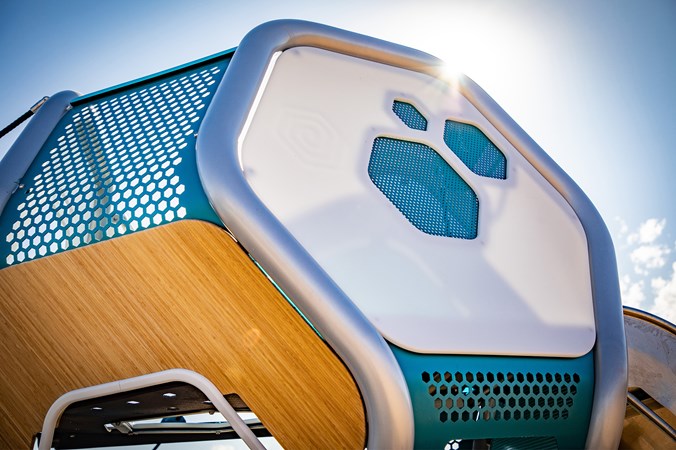 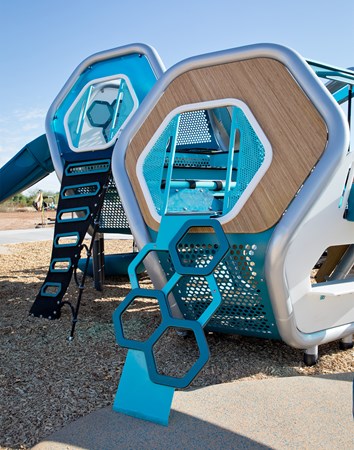 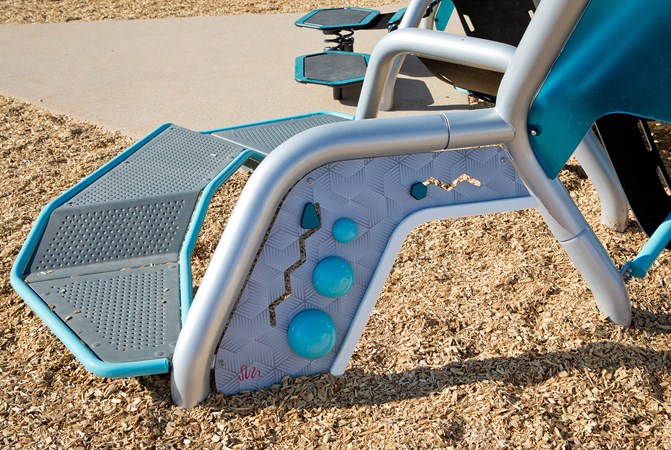 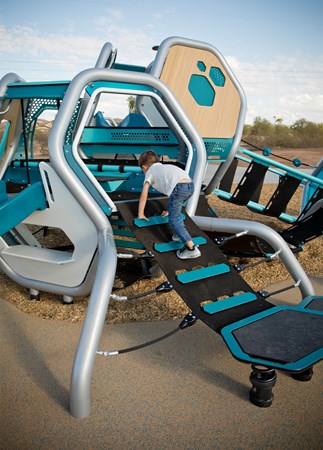 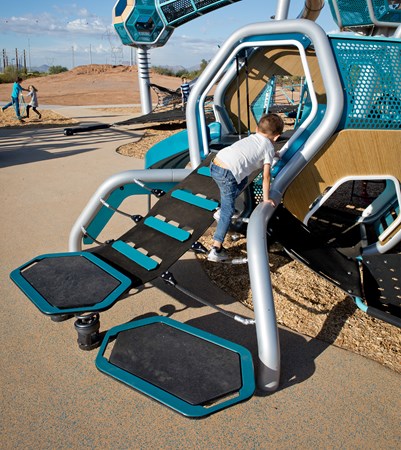 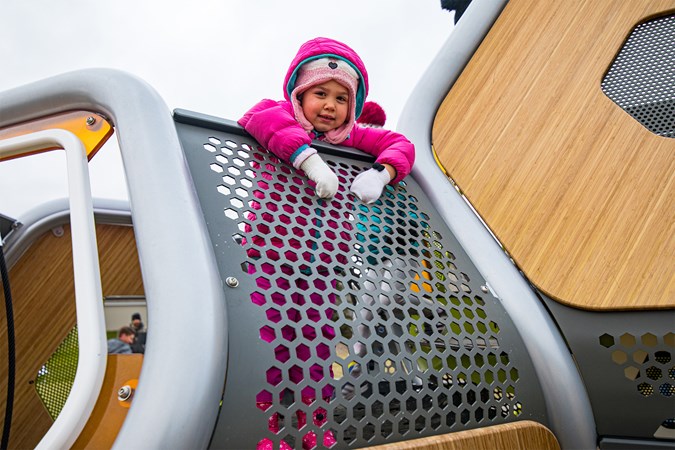 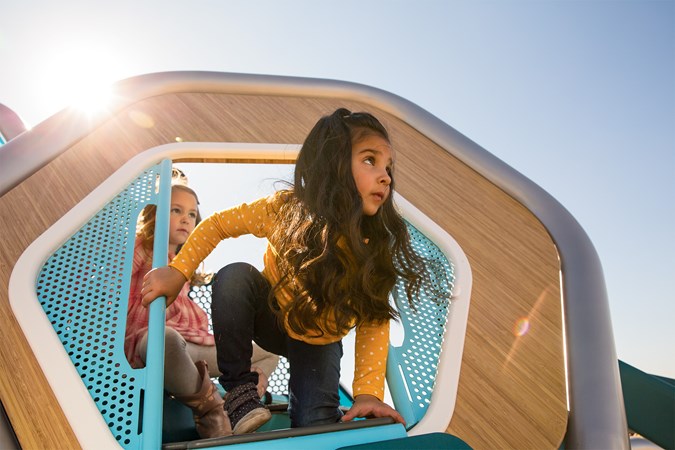 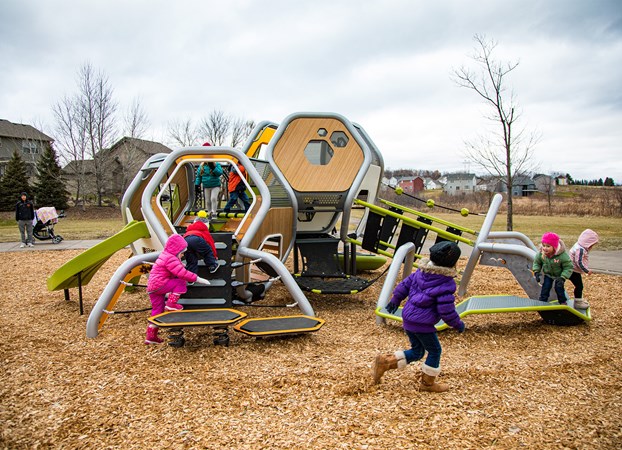 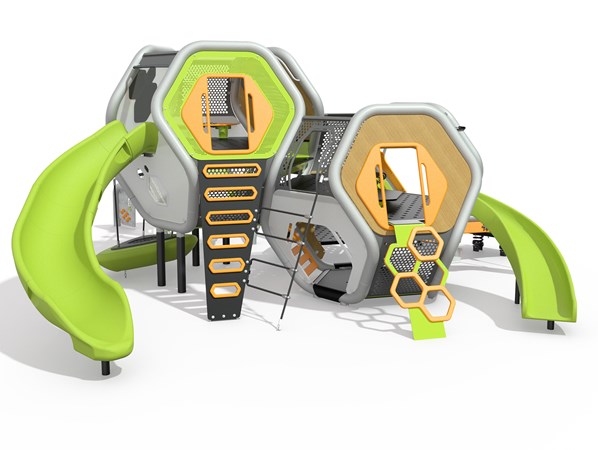 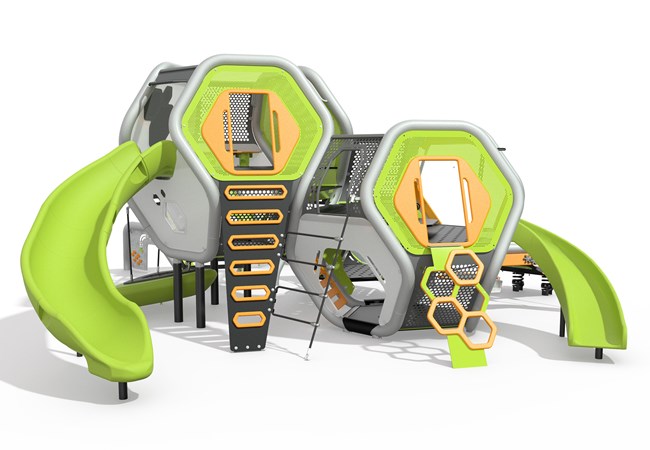 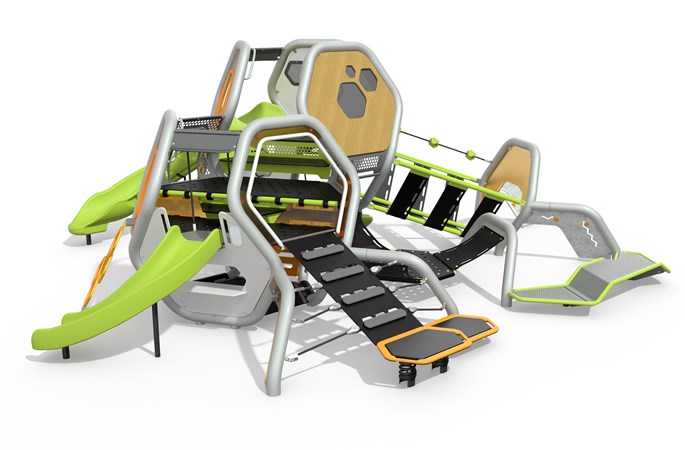 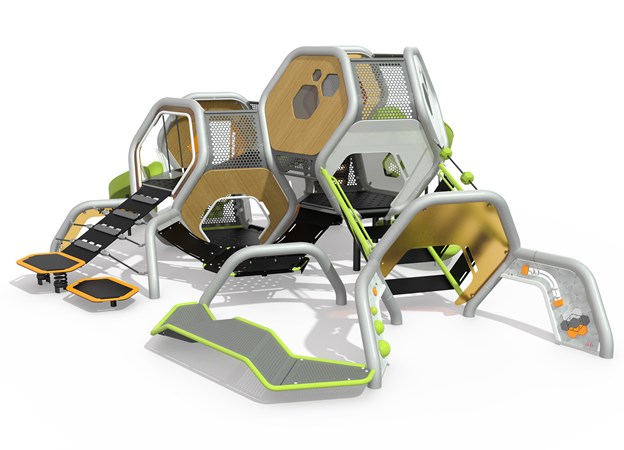 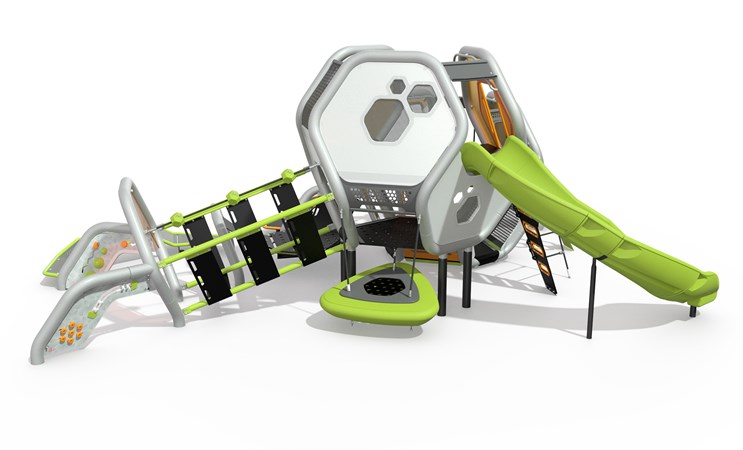 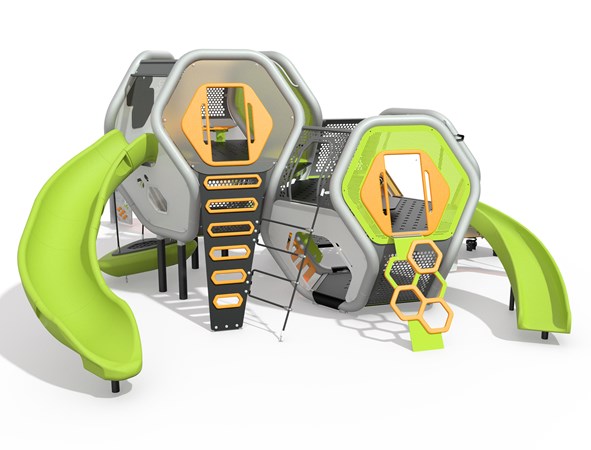 [video: scene begins with a full view of the new Hedra Tower and Hedra playground structures with its unique hexagonal shaped climbers and pods. The scene switches to a full side view of the Hedra Scout play structure as children climb up the different access points. Camera switches to a top down view of a young boy as he climbs up the belted steps inside one of the hexagonal pods.]

[video: a young girl slides and spins the shapes of a shapes panel inside one of the Hedra pods.  The camera focuses on the girls had as she spins and slides the triangle shape across the panel. The young girl looks out the hexagonal pod of a perforated panel made of smaller hexagons.]

[video: scene switches to a top down view as the girl slides down a curved slide. Scene switches to the view of the top of a slide as a boy rides down to the bottom. A child off camera speaks.]

[video: a young boy crouches as he plays with a shape on shape slide panel on a lower outside section of the play structure. Scene switches to a boy as he climbs up a belted panel into one of the hexagonal pods. The camera switches angles to a side view of the boy as he continues to climb up the belted climber. Scene fades to black.]

[video: fade into a overhead view of a new park location of a Hedra Scout play structure as children slide down the two different curved slides. Children giggle and have indistinct conversations as they climb up the different rope and belted climbers. The camera follows as a young girl rides down a slide. A second child slides down the slide towards the camera. They look up to the camera with a smile and grunt. Scene switches to a view of the top of the slide as a girl squeals as she rides down.]

[video: close-up of a young girl as she turns to the camera and giggles. Camera switches to a top down view of a boy as he climbs into one of the hexagonal pods with bamboo paneling. A girl climbs on the outside of a pod on the many unique climbers. Two girls climb on the top deck of a pod.]

[video: a girl spins a triangle shape on an outer panel of the Hedra Scout play structure. The shape hits a near by bell as the girl shouts.]

[video: a girl walks across a geometric shaped climbing stepper. She jumps down to the lower section of the climber next to another young girl. Scene switches to a young girl as she climbs up onto the unique shaped stepper stabilizing herself on the rounded hexagonal panel next to her. Screen fades to black.] 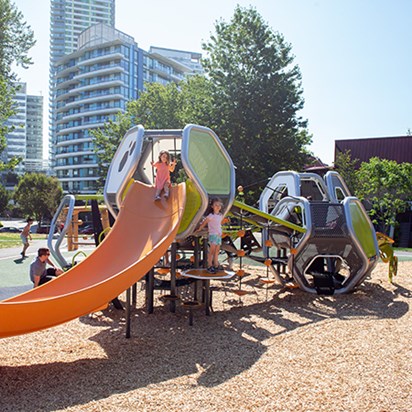 Endless formations of fun are rooted in the new geometric playscape of Hedra®. The shapes create playful pods that link together, forming a interconnected matrix of three-dimensional play. Natural bamboo and polycarbonate panels offer colorful light and pathways that lead into areas where friends can gather. 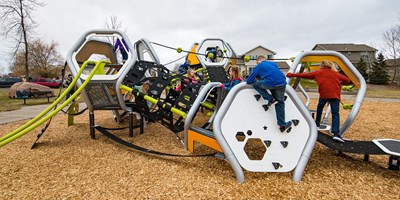 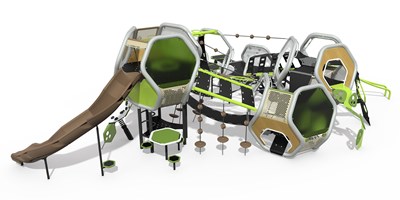 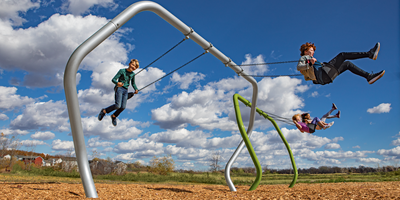 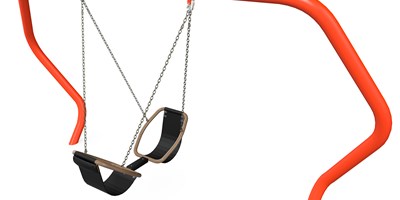