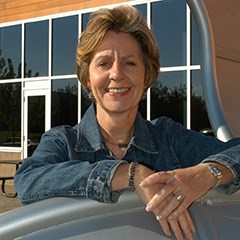 "Our highest purpose is to make a difference in the world - create a better place for children and families."

Barb King passed away in 2008 after a seven-month battle with cancer, but her passion and legacy live on. As cofounder and president of Landscape Structures, she was both an accomplished marketer and operations leader, yet still remarkably down-to-earth and close to her employees.

She advocated an open, friendly and empowering culture at Landscape Structures, ensuring that every one of the more than 300 employees had an equal voice in suggesting change, improvement and progressive action for the company.

[video: fade in to a view up at Barb King as she holds onto a microphone and turning to her right. Scene fades to black, fade in to a black and white of Barb wearing a visor and an apron while she looks down. Screen fades to black and back into a view of Barb laughing with people while they stand at a convention next to a standing seesaw. Fade to black, fade back into a still image of Barb smiling and sitting at the top of a large red rock structure. Scene fades to black.]

[video: fade into a blue silk background billowing in the breeze as white text appears reading: 1992 Entrepreneur of the Year, State of Minnesota Induction into National Institute of Entrepreneurs Outstanding Business Woman of the Year. Fade to black.]

[video: fade into Barb as she walks out from the shades across a stage wearing a light blue dress. She does a slight bow to the crowd and a curtsy. Scene switches to a still image of a young Barb smiling while whiling onto a brown horse’s bridle. Switch to a still image of Barb and Steve seated at chairs on a stage holding microphones and large books in their laps. Switch to a still image of Barb smiling to the camera wearing a red scarf. Switch to a vertical pan of a portrait of Barb standing at a Mobius climber outside the Landscape Structures office. Scene switches to different shapes of a pink squared background. The squares flow across the screen as white text appears reading: Barb King 1946 – 2008 A Great Leader.]

[video: scene zooms into a still image of an elevated shot of all the Landscape Structures employees outside the office building. The scene zooms in on Steve and Barb King in the large crowd of people. Switch to the scene zooming out from a still image of Steve and Bard smiling on the back of a teal motorcycle. Friends stand behind them leaning peddle bikes. Scene switches to Barb speaking at a podium. Scene switch to the camera zooming in on a red table card with a portrait of Barb and white text reading: Congratulations Barb King, LSI President, who has been named an honorary member of ASLA.]

Barb: We’re the greatest aspects this business and the most rewarding is definitely to know that we’re making a difference in kids lives and all the users of our playground equipment. It’s just really rewarding to come out to a playground and see all these smiling faces we really do make exceptional fun.

[video: scene switches to Steve and Barb as they report at a playground.]

Barb: Undoubtedly and for most of mine to me is the people that have brought us here the vendors, the employees, sales, reps, customers, and obviously the kids.

[video: Steve nods in agreement as Barb speaks while children play all over the playground behind them. Fade to black and into a blue background with white hazy start shapes. White text appears reading: 2007 & 2008 Honored as Minnesota Work-Life Champion, Center for Ethical Business Cultures.]

[video: scene fades into a man as he speaks about Barb King. White text appears in the lower left corner of the screen reading: Joe M. Lifelong Landscape Structures Employee.]

Joe: Because of the, the partnership of Steve and Barb they each bring something different we wouldn’t have the success that we’ve had, had we not had that good marriage in both their personal life and here at work is a very, very good I’m sure without Barb at the helm we wouldn’t be here.

[video: scene fades to black and into a pink silk background. White text appears in the middle of the screen reading: Barb King 1945 – 2008 A Great Person. Fade to black.]

[video: a man standing at a playground speaks about Barb King. White text appears at the bottom of left corner of the screen reading: Paul C. Installer Partner.]

Paul: The one thing I remember is Barb King dancing all night with everyone.

Paul voiceover: She would dance the whole night you know she would be one of the last ones to leave. Steve always let early but our boys stayed and danced with everyone.

[video: a man in a white suit and a white top hat adjusts his microphone attached to his ear as Barb and other employees clap and dance behind him on a stage in front of a crowd. Scene fades into Barb and another woman as they goof off at a playground. They giggle at themselves.]

Barb: I want to make sure I wasn’t doing this.

[video: Barb holds a folder out far from her face and pulls in close as she smiles and laughs. Side view of Barb as she stands by a double slide and talks to a different camera off screen.]

Barb: You could do it better why not do it.

Barb was committed to children and passionate about showing them how to lead healthier lives and appreciate nature. In this spirit, Barb created the Säjai® Foundation, a national nonprofit organization dedicated to teaching children the value of healthy living by encouraging them to experience the outdoors, be active and make smart nutrition choices.

In May 2013, Barb's legacy gained more nationwide reach when the Säjai Foundation® merged with Camp Fire, an organization emphasizing camping and other outdoor activities for youth. Camp Fire serves more than 250,000 youth and families in communities across the country. 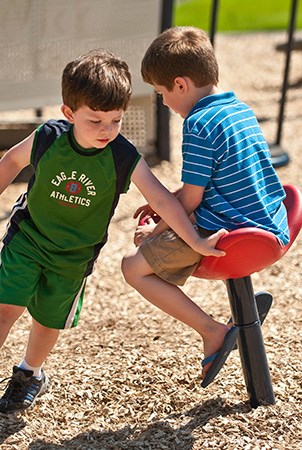 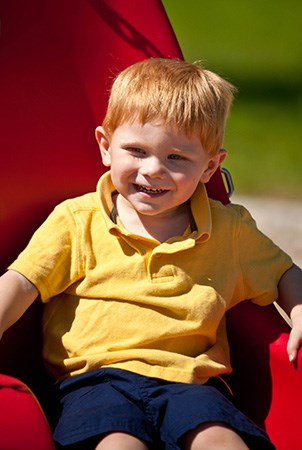 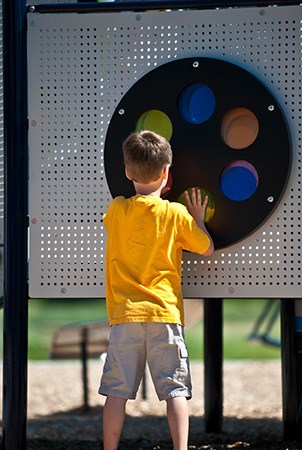 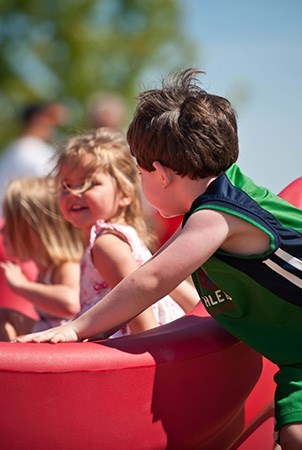 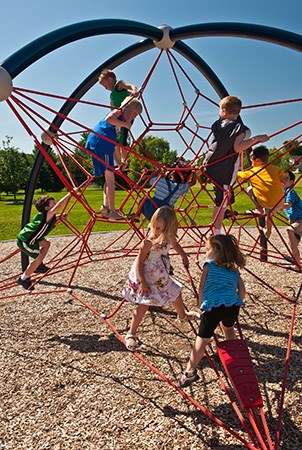 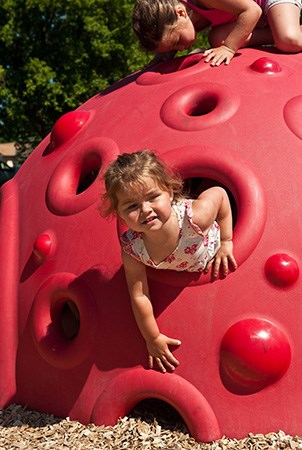 In 2010, the Barb King Inspiration Park was completed in Delano, MN, as a unique playground honoring a unique person. The novel angles, innovative panels and inclusive activities welcoming children of all abilities have become a central gathering space for the Delano community. The park was assembled from recycled materials in honor of Barb’s commitment to the environment and innovation.

Dreaming about your next project?
We're here to help you get started.