Founded in 1915, Kiwanis International is a global organization of volunteers dedicated to changing the world one child and one community at a time. Today, the organization has nearly 600,000 members in 80 countries and geographic areas, and their members have made a positive impact in millions of lives, hosting nearly 150,000 service projects each year. Each community has different needs, and Kiwanis empowers members to pursue creative ways to serve the needs of children.

Kiwanis International aligns with partners who share their mission and preserve the trust of members and the communities, children and families they serve. Landscape Structures joined Kiwanis as a Vision Partner in 2013 to bring play and playgrounds to communities across the globe. 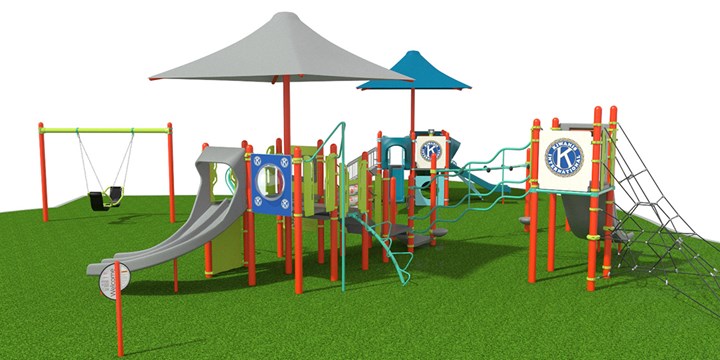 Kiwanis has more than 600 clubs in the U.S. and Canada that will celebrate their centennial between now and 2025. We've worked closely with Kiwanis International to create three new exclusive designs at various price points that will allow clubs of all sizes to bring a playground to their community. 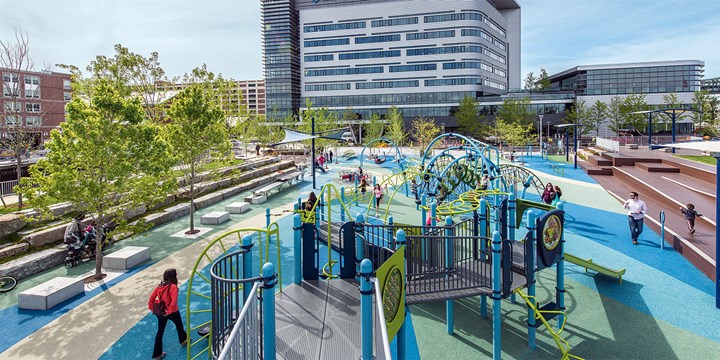 Looking for a dynamic speaker who can present virtually at a future Kiwanis club meeting? In partnership with Kiwanis, we've created a speaker's bureau with a variety of park, playground and water play topics to start (or continue) the conversation about bringing play to your community. 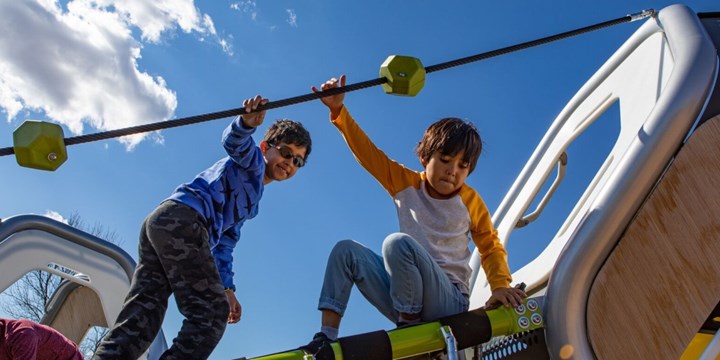 Kiwanis members are passionate about making a difference. Helping kids grow and succeed is at the heart of everything they do. But how they do it is just as important. Kiwanis believes neighborhoods and the world are best served when people of all ages and different backgrounds work together to share their time and talents.

Video features the partnership between the Kiwanis Club of Wilmington, The Miracle League of Wilmington and Landscape Structures and their efforts to create a play environment that brings kids and families of all abilities together for play.

[video: screen is black as electric guitar music plays in the background. White text fades into the center of the screen reading: Landscape Structures, Kiwanis International and The Miracle League all partnered together to create…this.]

[video: fade into a line of Major League baseball team flags blow in the wind on the side of a sidewalk, fade out. Fade in to two girls playing on a roller table as families play on the playground behind them. Fade to black, text appears on screen that reads: Rick Zigler Playground Committee, Kiwanis Club of Wilmington, North Carolina. Rick stands by the playground as he speaks to the camera.]

Rick: One of our members just got this idea about, well why aren’t we, he was talking about this park. Why don’t we build a playground on this park because Kiwanis is all about serving children.

[video: fade to black, text appears on screen that reads: Doug Smith Playground Committee, Kiwanis Club of Wilmington, North Carolina. Doug stands in front of the playground as families pass behind him.]

Doug: Kiwanis builds playgrounds all over the world. We had a speaker in from the Wilmington City Parks and Recreation Department who told us about plans for this Olson Park.

[video: camera switch to a front entrance view of the Olsen Park sign. Sign has four pictures at the top, top left image of a monarch butterfly on a flower. Second photo of a softball glove with three softballs and a batting glove sitting on the ground. Third photo of pink flowers and fourth photo of a playground structure. Sign reads: Olsen Park, a joint parks and greenspace project, New Hanover County, City of Wilmington.]

Rick voiceover: We started a fundraiser to build this playground. We got the city in the county to offer to match whatever we raised. Then along came Access of Wilmington who said why don’t we make this an all-inclusive playground.

[video: a boy spins another boy on the Gyro Twister playground spinner. Two children sit on either end of the PodStomper Bridge as a boy stands in the middle to seesaw the bridge back and forth. Camera switch to a blue Permalene panel with yellow text reading: Kiwanis Miracle Playground. Two boys slide down the roller slide together away from the camera. A father helps his baby daughter as she crawls into a Crawl Tunnel.

Rick voiceover: Landscape Structures Incorporated, LSI is now a Kiwanis partner they’re the ones who’s furnished all this equipment.

[video: camera zooms in on the end of a Hand Cycler post with the Landscape Structures logo beveled in the top. A young girl sits on the Blender Spinner as another girl spins her around. Two women stand and watch as a young girl walks over the Boppity Bridge. Camera switches to a full elevated view of the fence in inclusive playground area as families play all around.]

Bob: It’s been fabulous working with the equipment supplier when we were talking about what we’d like to appeal to.

Bob voiceover: Such as, touch, sound, and stimulate other feelings such as manual dexterity and that type of thing.

[video: a young boy plays at a Ring-a-Bell panel. Another boy rushes up to join the other boy in playing with the bell panel. Camera zooms in on a young girl as she spins on the Gyro Twister playground spinner. Camera switch to a young boy climbing on a cargo net.

Peter voiceover: I had the unique opportunity of visiting Landscape Structures in Minnesota and from the day I walked through your office doors until the completion of this project I have just grown, my respect for this company has just grown.

[video: Side view of a girl as she walks up to a boy sitting on the Boppity bridge. Back view of two girls playing in a Fun Mirror panel on a sensory learning wall. Front view as a girl climbs through the suspended rings of the O-Zone climber. Side pan view across a Pod Stomper as several children play together bouncing and moving the see saw type bridge. Close-up of a young girl’s feet as she stands in the spiral shaped bar of the Blender spinner. Fade to black, text appears on screen reading: Peter Hexter, General Chair Miracle League of Wilmington.]

Peter: You guys walk the talk everything you said you were going to do you did and more.

Peter voiceover: The quality of the equipment the commitment to excellence, it’s unbelievable.

[video: a young girl climbs up a Sunbeam climber. Camera switch to a top down view of a boy as he watches the Color Splash panel as someone spins it from the opposite side. A young girl sitting on her side inside of a crawl tunnel making faces at a baby girl standing at the other end of the tunnel. Three girls work together to make the Sway Fun glider move as other children ride on the benches.]

Blair: It’s amazing what this will do for people with disabilities and all abilities to be able to use this park.

Blair voiceover: It’s just you know if there’s no words to describe it, it’s amazing.

Bob: And to see the camaraderie of the children here. No matter what your disability is-

Bob voiceover: that everybody’s accepted the same and alike, and you aren’t sitting on the sidelines and no matter what degree of abilities that you have just overwhelming to see it here and I’m so proud that we could be part of it, provide this for the city of Wilmington.

[video: top down view of a group of girls playing together on the Sway Fun. Camera switch to three children as they swing together on the inclusive Oodle Swing. Two women stand by as a girl steps up onto a Giggle Jiggler climber from her walker.]

Peter: It’s brought a community together it’s created an awareness that started today and will go on for generations.

Doug voiceover: They see the Kiwanis shirt and they’re saying thank you and I’m feeling good about seeing kids being able to be on a playground for the first time.

Rick: I would suggest to any other Kiwanis Clubs that wanted to do the same kind of thing and you could certainly do it on a smaller scale than this, might contact LSI they’re good people to do to work with.

​We'll help you create an amazing playground that kids of all ages can enjoy and that complements your community's unique personality. Our playground consultants can help you create a one-of-a-kind play space design. With the purchase of a playstructure, Kiwanis clubs may receive one of these complimentary items to bring recognition to their club. 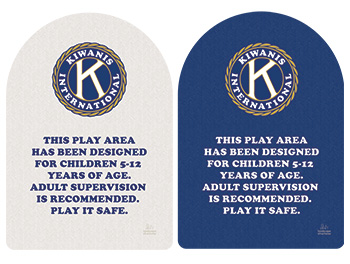 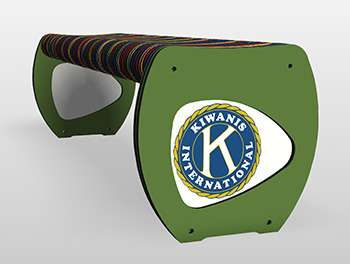 Learn more about planning your Kiwanis playground with our Kiwanis Playground Planning Guide.