There's a Play Deficit in America

KABOOM! is dedicated to ensuring that all kids in America get a childhood filled with the balanced and active play needed to thrive. Celebrating more than 20+ years of service, the national nonprofit organization rallies communities to fund, plan and build playgrounds throughout the nation.

KABOOM! inspires communities to make play the easy choice and works to drive the national discussion about the importance of PLAYces. Since their inception, KABOOM! has collaborated to build or improve more than 17,000 playspaces, engaging more than 1.5 million volunteers and serving over nine million kids.

We're proud to be selected as KABOOM!'s Partner in Play. Landscape Structures will serve as the primary supplier of playground equipment and partner to build hundreds of play spaces in communities in need across the United States, Canada and Mexico. These playgrounds deliver safe places to play and instill a sense of ownership and pride that revitalizes neighborhoods.

Landscape Structures has a rich history of working with KABOOM! for nearly two decades on community-built playspaces including a basketball-themed playground for NBA All Star Week, the 1,000th KABOOM! community build project in Atlanta, Ga., as well as many other much-needed playgrounds. See a gallery below of some of these exciting projects, and find a KABOOM! playground near you!

Read about our KABOOM! partnership

Video features the one thousandth KABOOM playground build of an Evos playground structure in Marietta Georgia.

[video: volunteers continue to unload boxes and playground equipment in the dim morning light. Volunteers wait at the back of trailers to grab pieces of the playground. A woman walks with an arch playground part past a snow fence. Text appears in the bottom of the screen reading: 7:00 am]

[video: a woman in an orange shirt smiles and waves to the camera as she walks back to grab another piece of the playground. Camera pans across the raw ground where playground post holes have been pre-dug.]

[video: fade in to a panning view of a nearby creek. Text appears in the lower left corner of the screen reading: Victory Park. Camera pans across the park grassy area where playground parts have been laid down. A volunteer woman speaks to the camera.]

Woman: Getting ready for the best playground build of the year.

Woman voiceover: Thousandth Home Depot build it’s going to be awesome and we’re setting up all the Evos components out here.

[video: a woman places the full bucket seat swing on a man’s head like a helmet.]

Woman: It will protect you.

[video: camera zooms in on the man as he peeks through the leg holes of the bucket seat on his head. People laugh. Erica a KABOOM leading volunteer speaks to the camera.]

Erica: Today we are here to build the first Evo’s playground in the metro Atlanta area. We’re going to have about 250 volunteers from across the city of Marietta here, to build this playground start to finish in about six hours.

[video: A man stands in the middle of a snow fenced in area. Pan across two blue playground posts laying on the ground. A male Landscape Structures employee volunteer speaks to the camera.]

[video: A woman Landscape Structures volunteer speaks to the camera.]

Woman volunteer: I am very excited this is a cool day. This is what we work for.

[video: two men set up a KABOOM thank you volunteer banner attached to two American flags. Camera pans across a row of double stacked wheel barrows. A man drags a plastic garbage can full of post diggers and shovels across the parking lot. Camera pans across a large pile of shovels and rakes lying on the ground. A woman Home Depot volunteer speaks the camera.]

Woman: Today is actually build day so Tuesday we were here preparing everything cutting wood and getting everything set up for the volunteers.

Woman voiceover: so that today when they arrive it which will be any minute now.

Woman: Then everything, will just, everyone will be assigned teams and they’ll know exactly what to do so.

[video: a group of volunteers spread mulch with rakes and shovels. Scene switch to a crowded line of volunteers as they proceed to the building area. Erica the KABOOM leading volunteer addresses all the volunteers.]

[video: the camera pans the crowd of volunteers as they respond back to Erica.]

[video: camera continues to pan the crowd as Erica speaks.]

Erica: Excellent, welcome to Victory Park, welcome to the one thousandth playground in partnership between KABOOM and Home Depot.

[video: the crowd cheers and applauds.]

Erica: So, I don’t forget anybody I’m just going introduce all the wonderful people in green shirts, if you guys could raise your hands. These are the wonderful team from Landscape Structures, they are the ones who designed and manufactured this incredible Evos playground we’re going to be building today.

Erica: On February twenty sixth I had the opportunity to meet with the children who attend the Marietta Center for Advanced Academics and they drew their dream playgrounds. And I asked them to imagine what they thought a playground might look like in outer space. And we will, you will see their dream playground come to life today so what you’re going to be building is not just some metal and some plastic, it’s not some tracks just being put together, some paint being put on the ground it is the dream playground of kids who live in the neighborhood.

Male volunteer: About a month ago we lost a very special friend from Landscape Structures one of the co-founders Barb King who I knew for many years and I just wanted to say to those folks publicly she meant a lot to me and to the playground industry and we miss her very much.

Erica: Most importantly on behalf of the six hundred and nineteen thousand children that have benefited from these playgrounds I say thank you very much, welcome we are thrilled to have you on this gorgeous day.

Erica: We need everyone to join in!

[video: the crowd claps and cheers as a Home Depot volunteer grabs the microphone from Erica to hype up the crowd.]

Home Depot volunteer: Ah! Give me an H!

Home Depot volunteer: Give me an O!

Home Depot volunteer: Give me an M!

Home Depot volunteer: Give me an E!

Home Depot volunteer: Give me a D!

Home Depot volunteer: Give me a E!

Home Depot volunteer: Give me a P!

Home Depot volunteer: Give me a O!

Home Depot volunteer: Give me a T!

Home Depot volunteer: What do you get?!

[video: an American flag blows in the breeze as a group of volunteers walk towards the build site in the background. Ground view up to a woman as she speaks to a group of volunteers. A group of volunteers listen to a Landscape Structures volunteer as they explain the building process of the Evos support bars. Home Depot volunteers begin sliding the Evos arch supports together to begin assembly. Close up of the head of a shovel as a volunteer’s feet pushes it into the ground to start digging.]

[video: two women sitting on the ground organizing a pile of screws and bolts.]

[video: camera zooms out from behind volunteers as they hold up the building directions and packages of screws and bolts. Paula a playground building volunteer speaks to the camera.]

Paula: I only saw Evos on paper I can hardly wait to see it.

[video: fast motion scene of volunteers as they lift and anchor the three Evos support arches. Scene switch to three women as they work together to build a periscope play panel.]

[video: a young boy speaks to the camera about the playground structure he is helping to build.]

Boy: We are building the O-Zone.

Camera man: Your building the O-Zone hows it going so far?

It’s good, see these there is seven things. And as you climb through them and as you go they get wider and they wiggle more. Right now, we’re trying to figure out how they go on to their bases.

[video: A colorful bumblebee mascot dances for the camera. A volunteer looks down at a wheelbarrow as he mixes concrete. Close-up of the hoe as it mixes the concrete in the wheelbarrow. Two men tip a wheelbarrow with concrete as a woman scoops it into a hole of a Mobius® Climber support post. Camera switches to behind the woman as she continues to scrape the concrete into the hole.]

Erica: And then this is our Evos park right here.

[video: volunteers even out the mulch by a Mobius® Climber. A local man speaks about the park they are building.]

Man: And this is the first time we’ve ever put anything like this in any of our parks, so we are really excited.

[video: camera pans down to a finished sand box play area. A woman hammers an arrow onto a post filled with different arrows labeled with different locations and how many miles they are away. Two groups of volunteers carry and drag tarps of mulch to the next play area build sight. A woman kneels to wipe the concrete off of a climber post.]

[video: two Home Depot volunteers stand on the side of the road and speak to the camera.]

Woman volunteer: I’ve done over twenty builds and every time I do it it’s like the first time. This is the first one of this type, and it’s fantastic it’s fabulous I love it. When it’s finished, and the kids come out and the eyes light up and it’s like “Ah!” that’s my favorite, that’s my favorite. I don’t know if I’ve seen this much mulch.

Woman volunteer: This is a lot.

[video: close-up of a name tag on a shirt that reads: Mayor, City of Marietta, Bill Dunaway.]

[video: the mayor speaks to the camera.]

Bill Dunaway: You know none of this stuff is like what I played on, but it looks fun. Maybe I’ll have some grandchildren play on it. Looks, looks fun, very impressed.

[video: four volunteers carry the last four shovels of mulch from the parking lot, across a newly set up path way to the playground area.]

[video: Erica address the crowd of volunteers while standing by the Mayor and other leading volunteers.]

Erica: You are amazing and my work word for you today is congratulations. Look at this incredible playground!

[video: the mayor and three other volunteers hold an orange wood plank with all the playground sponsors as a boy begins to saw through the middle of it.]

[video: they finish sawing through the board and the crowd cheers.]

Erica: And an enormous two and a half semi-trucks full of thanks, to our friends from Landscape Structures who designed this incredible equipment who came from Minnesota to help us install it, make sure that the kids in Marietta have the coolest most innovative playground out there. And let’s give them a round of applause.

[video: crowd cheers and applauds. The group of volunteers stand and sit in front of the freshly built playground for a group photo. They raise their hands and cheer for the camera. Fade to black, text appears on screen reading: Better playgrounds. Better world. Text fades away as the Landscape Structures logo fades in to the center of the screen. Text below the Landscape Structures logo reads: playlsi.com.]

Some of the KABOOM! grant programs are listed below: Build it with KABOOM!

Plan and build a new community-built playground in your community by working with KABOOM! 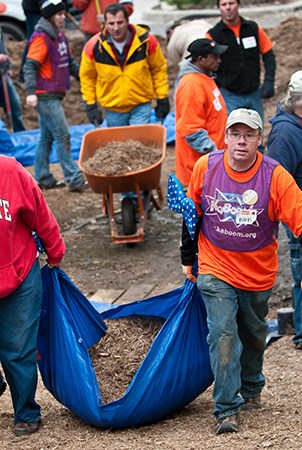 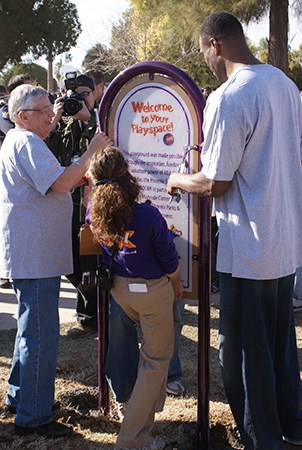 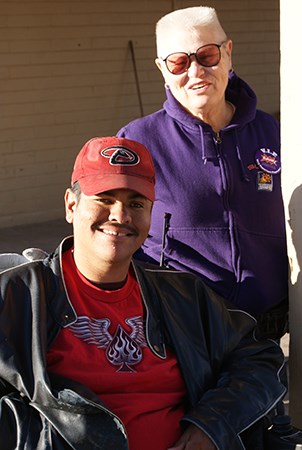 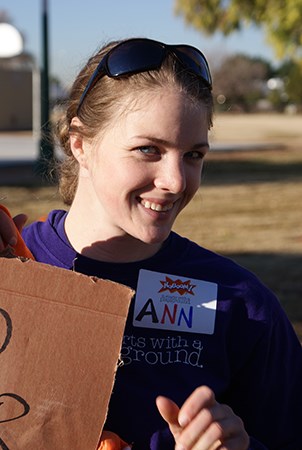 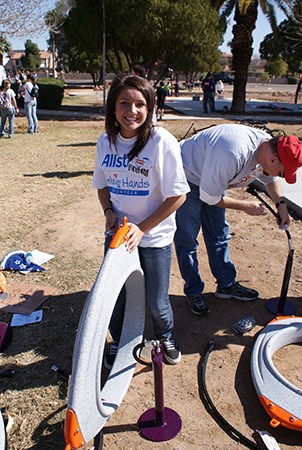 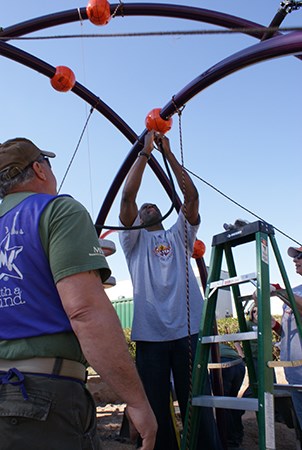 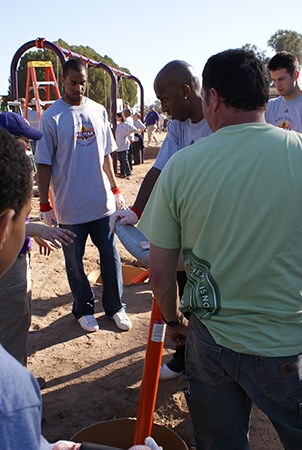 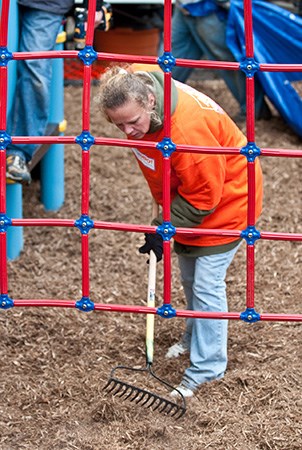 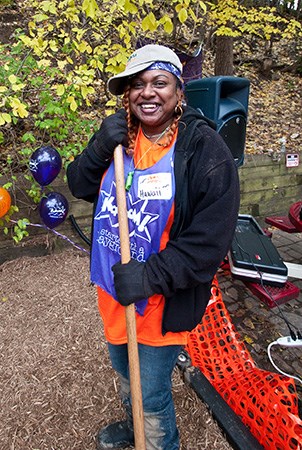